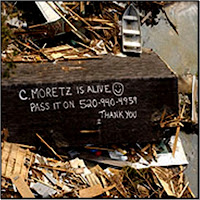 The message was painted on the roof of a splintered and sunken house in Waveland, Miss.: “C. Moretz is alive. Pass it on.” The message included a Tucson, Ariz., phone number.

Chris Moretz, 36, said he had decided to ride out the hurricane. “I was optimistic, naive, curious, dumb,” he said.

He said he was in his house when water poured in. It went from ankle deep to hip deep in five minutes. When it got waist deep on the second floor he swam out a window.

He found a boat and took refuge there. He left the rooftop message so his Tucson family would know he was alive. It worked.

“I probably had about 100 calls,” Gerard Moretz said. Some were from as far away as Puerto Rico and Canada.

Helping to raise up great leaders through the ministry of The Pentecostals of Kentwood and around the world.